A Taco-Friendly Guide to Cache Metadata in Drupal 8

Pay them in Tacos!

Say our partners who form the Chromatic brain trust, (Chris, Dave and Mark), do something crazy like base our reward system on the number of HeyTaco! emojis given out amongst team members in Slack. (Remember, this is an, ummmm, hypothetical example.) Now, say we wanted to display the taco leaderboard as a block on the Chromatic HQ home page. It's not like the taco leaderboard needs minute by minute updates so it is a good candidate for caching.

What do we save by caching? Grabbing something that has already been built is quicker than building it from scratch. It's the difference between grabbing a Big Mac from McDonald's vs buying the ingredients from the supermarket, going home and making a Big Mac in your kitchen.

So, instead of each page refresh requiring a call to the HeyTaco! API, we can just tell Drupal to cache the leaderboard block and display the cached results. Instead of taking seconds to generate the page holding the block, it takes milliseconds to display the cached version. (ex. 2.97s vs 281ms in my local environment.)

Communicate with your Render Array

We have to remember that it's important that our render array - the thing that renders the HTML - knows to cache itself.

The above quote is what I'll try to explain, showing some of the nitty gritty with the help of a custom module and the HeyTaco! block it builds.

I created a module called heytaco and below is the build() function from my HeyTacoBlock class. As its name suggests, it's the part of the code that builds the HeyTaco! leaderboard block.

For the purposes of the rest of the blog post, I'll focus on the above code's #cache property, specifically its metadata:

I'm going to go through them similarly to (and inspired by) what is on the aforementioned D.O. page about the cacheability of render arrays.

From Drupal.org: ...what identifies the thing I'm rendering?

In my words: This is the "what", as in "What entity is being rendered?". In my case, I'm just showing the HeyTaco! block and it doesn't have multiple displays from which to choose. (I will handle variations later using the contexts parameter.)

Many core modules don't include keys at all or they are single keys. For instance:

After looking through many core modules, I (finally) found multiple values for a keys definition in the views module, in DisplayPluginBase.php:

I'd also mention that on D.O. you will find this tidbit: Cache keys must only be set if the render array should be cached.

From Drupal.org: Does the representation of the thing I'm rendering vary per ... something?

In my words: This is the "which", as in, "Which version of the block should be shown?" (Sounds a bit like keys, right?)

The Finalized Cache Context API page tells us that when cache contexts were originally introduced they were regarded as "special keys" and keys and contexts actually intermingled. To make for a better developer experience, contexts was separated into its own parameter.

Going back to the need to vary an entity's representation, we see that what is rendered for one user might need to be rendered differently for another user, (ex. "Hello Märt" vs "Hello Adam"). If it helps, the D.O. page notes that, "...cache contexts are completely analogous to HTTP's Vary header." In the case of our HeyTaco! block, the only context we care about is the user.

Amongst team members, we discussed the difference between keys and contexts quite a bit. There is room for overlap between the two and I netted out at keeping things simple: let keys broadly define the thing being represented and let contexts take care of the variations. So keys are for completely different instances of a thing (ex. different menus, users, etc.) Contexts are for varying an instance, as in, "When should this item look different to different types of users?"

To show our partners (Chris, Dave and Mark, remember?) how great they are I have added 100 tacos to their totals without telling them. When they log in to the site, they see an unassuming leaderboard with impressive Top 3 totals for themselves. 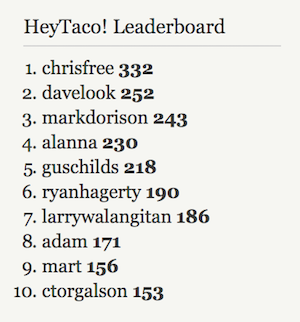 However, I don't want the rest of the team feeling left out, so for them I put asterisks next to the inflated taco totals and note that those totals have been modified.

Asterisks Remind us of the Real Score 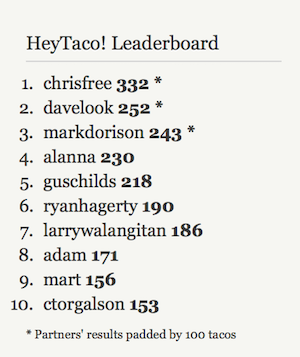 So, our partners see one thing and the rest of our users see another, but all of these variations are still cached! I use contexts to allow different caching for different people. But remember, contexts aren't just user-based; they can also be based on ip, theme or url, to name a few examples. There is a list of cache contexts that you can find in core.services.yml. Look for the entries prefaced with cache_context (ex. cache_context.user, cache_context.theme).

From Drupal.org: Which things does it depend upon, so that when those things change, so should the representation?

In my words: What are the bits and pieces used to build the markup such that if any of them change, then the cached markup becomes outdated and needs to be regenerated? For instance, if a user changes her username, any cached instances using the old name will need to be regenerated. The tags may look like 'tags' => ['user:3'],. For HeyTaco!, I used 'tags' => ['user_list'],. This means that any user changing his/her user info will invalidate the existing cached block, forcing it to be rendered anew for everyone.

From Drupal.org: When does this rendering become outdated? Is it only valid for a limited period of time?

In my words: If you want to give the rendering a maximum validity period, after which it is forced to refresh itself, then decide how many seconds and use max-age; the default is forever (Cache::PERMANENT).

So that's my stab at exploring #cache metadata and I feel like this is something that requires coding practice, with different use cases, to grasp what each metadata piece does.

For instance, I played with tags in my HeyTaco! example for quite some time. Using 'tags' => ['user:' . $user_id] only regenerated the block for the active user who changed his/her own info. So, I came upon an approach to use and pass all the team's IDs into Cache::buildTags(), like this Cache::buildTags('user', $team_uids). It felt ugly because I had to grab all the user IDs and put them into $team_uids manually. (What if we had thousands of users?) In my experimentation, that was the only way I could get the block updated if any user had his/her info changed.

However, after all that, Gus Childs reviewed my blog post and, since he knew of the existence of the node_list tag, he posited that all I needed to use as my tag is user_list, as in ('tags' => ['user_list'],). So, instead of manually grabbing user IDs, I just had to know to use 'user_list'. Thanks Gus!

Another colleague, Adam, didn't let me get away with skipping dependency injection in my sample code. He also questioned the difference between keys and contexts and made me think more about this stuff than is probably healthy.

Managing Drupal configuration and keeping it in sync requires attention to detail and process. Automation can add to the problem, but also solve it.

Learn how Ansible can be used to standardize and automated Drupal deployments.