Many designers are praising the benefits of Atomic Design. Rather than designing pages, Atomic Design focuses on designing systems of individual, reusable components. Designers aren't - or at least shouldn't be - the only ones thinking this way. From content strategy to QA, the entire team must be on the same atomic page.

Development is one area of a project that stands to benefit the most from this change in thought. Organizing a codebase by individual components keeps developers out of each other's hair, reducing the code and effort overlap that often occurs when building by page or section. It also makes the codebase much easier to understand and maintain. Developers will know where to find code and how to fix, alter, or extend it, regardless of the original author. After enforcing coding standards, only git’s history will know who wrote what. This all saves time and money.

Because there are many ways to do anything in Drupal, building every component with the same approach is crucial. In the Drupal world, this approach is known as "the Drupal way".

Building a component the Drupal way

Individual blocks, panel panes, or other UI elements would be examples of a component in Drupal. They are placed into regions within layouts to build pages. Other pages may use the same component in the same or different regions. A given component may vary across pages, but the design and intended functionality are similar. A simple search form is a good example, but they can be much more complex. 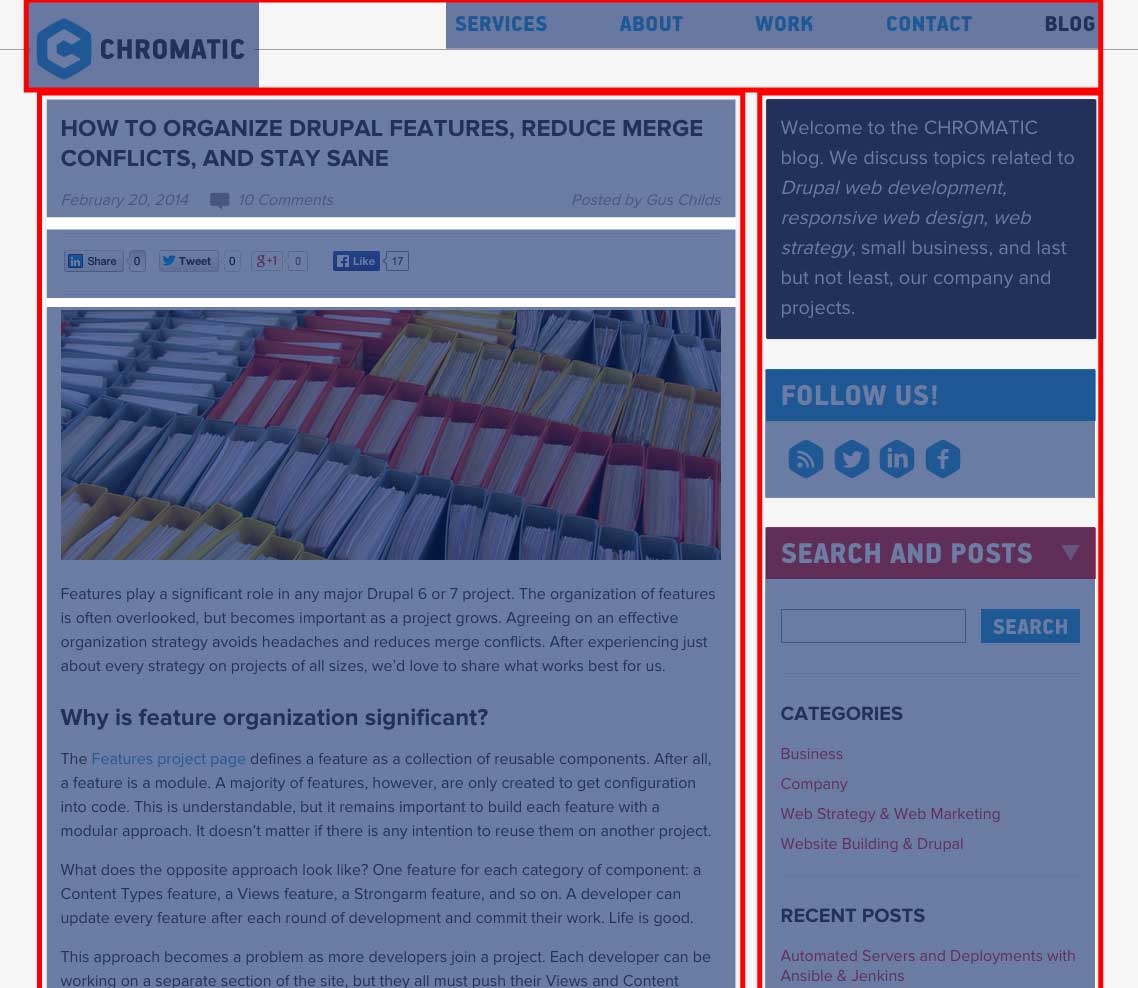 Design deliverables often arrive as complete pages. If the designers haven't already, identify the components that each page consists of. Break up the page’s layout into regions and those regions into components. Determine which components live on more than one page and if they vary between them. It also helps to identify different components that share design or functionality with others. It’s important to recognize early if they will be sharing code.

Before writing a line of code, determine where in the codebase the component will live. Organize custom modules by content types or sections and add relevant components to the same modules. A module exported with Features should be treated no differently than one created by hand; don't be afraid to add custom code to them (please do). The end goal is to have all back-end and (most) front-end code for a given component living in the same module.

Warning: This article is about to move fast and cover more ground than it should. It will move from back-end to front-end. There are many wonderful resources about each topic covered below, so they will be linked to rather than recreated. This will instead provide a high level overview of how they fit together and will highlight the most important pieces.

The most common container for a custom component is a block, created with a series of hooks. Contributed modules like Context can help place them on the page. More complex projects may choose to build pages with the Panels module. For pages built with Panels, custom panel page plugins are a component's container of choice.

The decision between blocks and Context, Panels, or another approach is important to make early in the project. It is also important to stick with the same approach for every component. This article will focus less on this decision and more on how to construct the markup within the container of choice.

If the component displays information from a node or another type of entity, render it with a view mode. View modes can render different information from the same entity in different ways. Among other benefits, this helps display content in similar ways among different components.

Create a view mode with hook_entity_info_alter() or with the Entity view modes contributed module. This module also provide template suggestions for each entity type in each view mode. Render an individual piece of information with a view mode inside of a component using entity_view() (you'll need the Entity API module) or node_view(). Alter the entity's information as needed using a preprocess function and adjust the markup in a template. Those pieces will be discussed later.

If a component lists more than one entity or node, build a view with the Views contributed module. It is best if the view renders content with view modes using the Format options. Create Views components with the Block (or Content pane for Panels) display(s). Views also provides template suggestions to further customize the markup of the component. The exported view should live in the same module as the code that customizes it. EntityFieldQuery might be worth considering as an alternative to using Views.

If the component does not display information from an entity, such as a UI element, build it with hook_theme(). Drupal core and contributed modules use hook_theme() to build elements like links and item lists. This allows other modules to override and alter the information used to render the element. Default theme functions and templates can also be overridden to alter their markup.

Choose a name for the element that will identify it throughout the codebase. Outline what information the element will need to build the desired output. Use these decisions to define it using hook_theme(). Again, keep this hook in the same custom module as the rest of the code for the component.

To render a hook_theme() implementation, construct a render array. This array should contain the name of the implementation to render and any data it needs as input. Build and return this array to render the element as markup. The theme() function is a common alternative to render arrays, but it has been deprecated in Drupal 8. There are advantages to using render arrays instead, as explained in Render Arrays in Drupal 7.

Templates place variables provided by entity_view(), render arrays, and preprocess functions into the markup. They should live in the “templates” directory of the same module as the rest of the component’s code. The name of a template will come from theme hook suggestions. Underscores get replaced with dashes. Tell hook_theme() about the template for each element it defines.

There should be no logic in the template and they should not have to dig deep into Drupal's objects or arrays. They should only use an if statement to determine if a variable has a value before printing its markup and value. They can also use a foreach to loop through an array of data. Further manipulation or function calls should happen in a preprocess function.

Use preprocess functions to extract and manipulate data such as field values and prepare them for the template. They are the middleman between the input and the output.

When using a CSS preprocessor like Sass, there isn’t much of a penalty to dividing the CSS into many files. Create a new Sass partial for each component and give the file the same name as the component. Keep them in a “components” directory within the Sass folder structure. Unlike all other code mentioned in this article, it is often best to keep all CSS for these components within the theme. Only keep CSS that supports the core behavior of the component in the module. Consider what styles should persist if it were a contributed module used with other themes.

In the component’s template, base the class names off of the component's name as well. This makes it easy to find the component’s Sass after inspecting the element in the source. Follow the popular BEM / SMACSS / OOCSS methodologies from there.

Coming up for air

As mentioned, there are often endless ways to complete the same task in Drupal. This makes learning best practices difficult and "the Drupal way" will vary in the minds of different experts. The best way to grasp what works best is to start building something with other people and learn from mistakes. The approach outlined in this article aligns with common practice, but mileage will vary per project.

Regardless of approach, focusing on components before pages will only become more important. Drupal content is already displayed on everything from watches to car dashboards. The web is not made of pages anymore. Designers have begun to embrace this and Drupal developers should too; everyone will benefit!

Continuous website performance monitoring is critical to optimize speed and user experience. Use this approach to get started with free tools.
Read More

Continuous website performance monitoring is critical to optimize speed and user experience. Use this approach to get started with free tools.