A common difficulty in web development is keeping configuration consistent between environments. Drupal keeps most configuration settings in the database and it can be a pain to keep databases across environments synchronized. Solving this conundrum was one of Drupal 8's goals and the focus of D8's Configuration Management Initiative (CMI). All site configuration is saved in YAML files (hooray for version control!) and can be shared between site environments.

The Way We Were

Let's take a classic example from before D8, using the beloved Views module. When you build a great new view on your local machine you still need to get it onto the production site. You could repeat what you did on your local machine and build the View by hand on prod, but that's just repeating all the work you have already completed, not to mention, prone to user error. Most developers are too lazy to do that anyways, so they depend on Drupal's Features module. The Features module works by exporting db configuration settings into Drupal module code which can be shared amongst environments. It usually works pretty well, but it turns out the Features module was not built for handling deployment and configuration. These tasks have fallen into its lap because, until now, it was the only game in town.

* At the time of writing the default installation actually created two directories: active and staging, but that was changed to just one, the staging directory which subsequently was changed to sync. The blog post has been updated to reflect this.

So in the above screenshot the configuration directory's name is

and the full path of the sync directory is:

The configuration management system provides a UI for uploading and double-checking changes before applying them to the live site. (Of course, there are Drush commands, drush config-export and drush config-import that allow you to import/export through the command line too.)

How do you Feel About Clones?

Now hold on, you can't upload one site's configuration to any old site; you can only synchronize configuration settings between cloned instances of a site. This restriction was a conscious decision made by the Drupal CMI team. So you need to start with one environment and then clone it. If you don't do this, Drupal simply will not allow configuration settings to be imported.

Steps for cloning a site:

Assuming your cloned site is working, you are ready to import settings from one environment to another. In my case, I created a new view called bookshelf that needs to get to prod. Below are screenshots of what the process looks like.

In this screenshot, I have just exported and downloaded my dev environment's configuration tar.gz file. 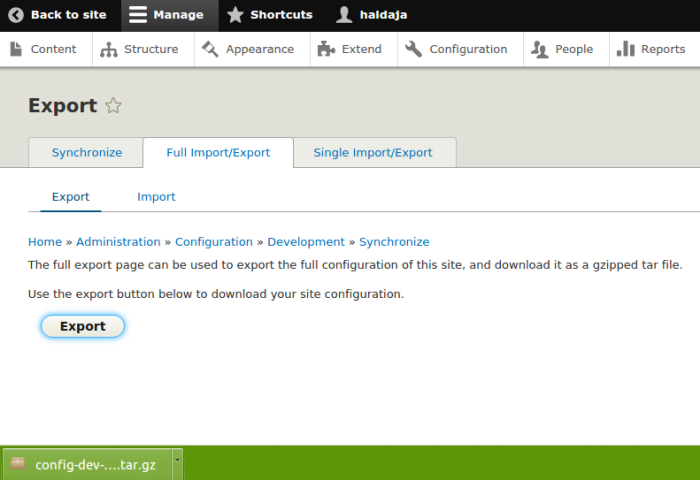 Having switched to my prod environment, I select the downloaded tar.gz file and upload it. 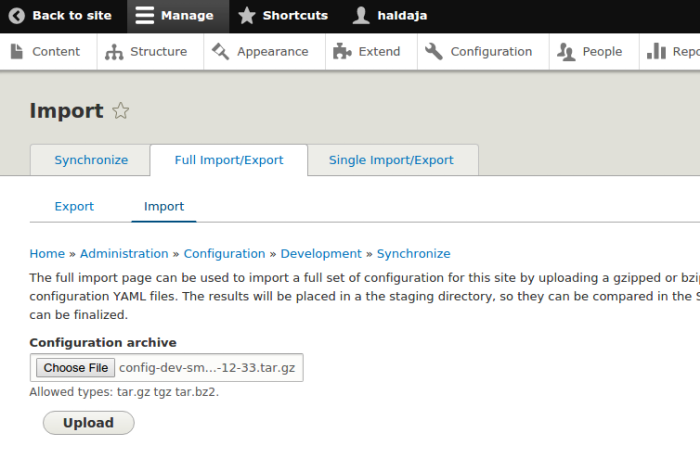 After a successful upload you can see that there are changes. Note that my new bookshelf view is there. I can click the View differences button to compare the changes. 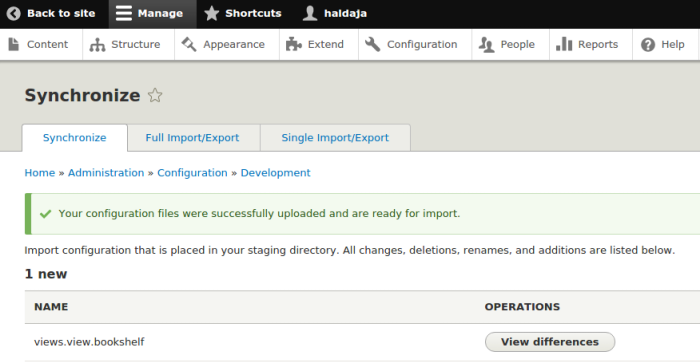 Having clicked the View differences button, I see the changes that are about to be made. 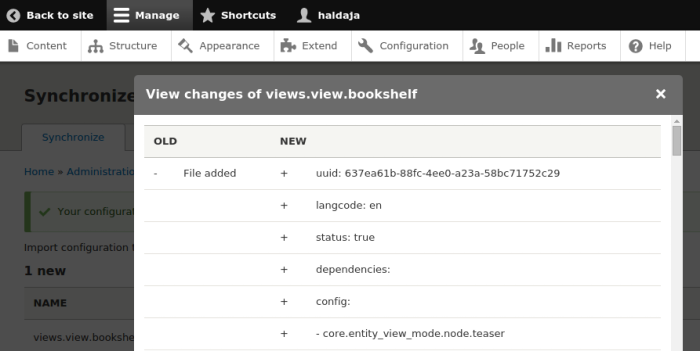 Satisfied with what I see, I can click Import all to apply the changes.

A progress bar displays as Drupal imports the settings.

A Site With a View

Voilà, the new view is on my prod site.

Whew, so there were a bunch of steps to get things set up, but once you have your environments in place, it's easy to move settings between them. Of course, in a full-on, professional development environment you would harness the power of Drush and use scripts to do all the dirty work. But that's a tutorial for another time.

Composer already manages our PHP dependencies, so why not let it manage our utility scripts too?

Don't break your cache, use BigPipe instead.

Serving dynamic content, while maintaining the cacheability of a Drupal 8 site, used to be a tedious task. Drupal 8 did introduce a Lazy Builder way back when, but using it requires a fair amount of coding. Instead, we’ll take advantage of the BigPipe module which was included as a stable module since Drupal 8.3.