Our first annual Chromatic team retreat was December 10-14, 2015, at the Alisal Ranch in Solvang, California. 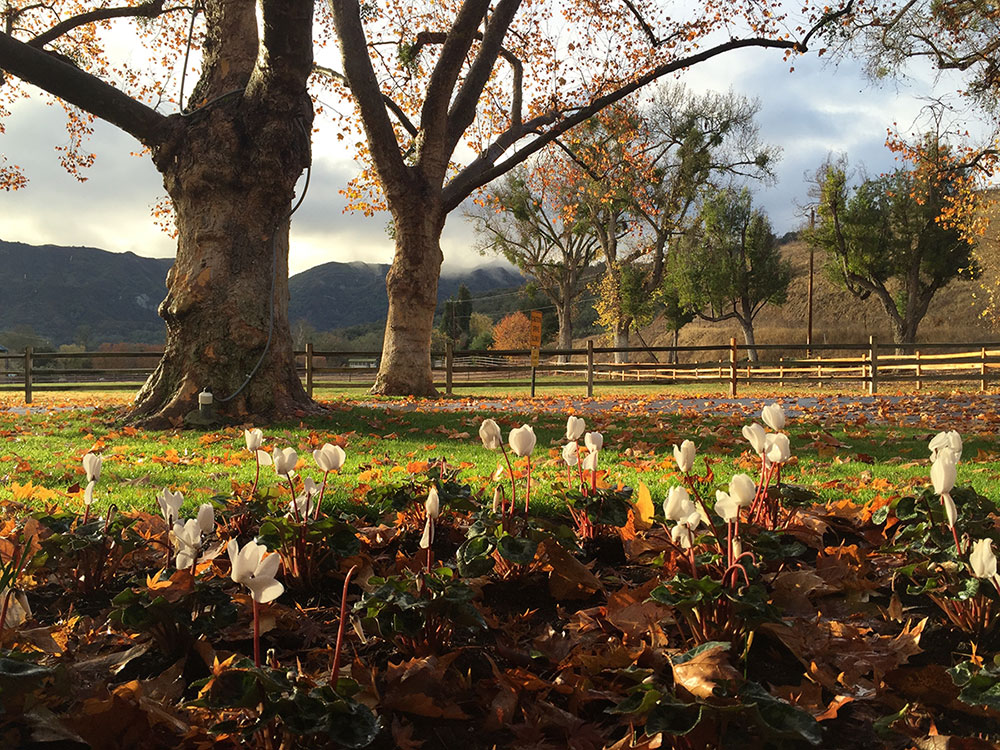 For some of us, it was our first time meeting face-to-face. We’ve gained three team members since DrupalCon LA, which was the last time the entire Chromatic team was in one room. It was great to see everyone in person - no one had met Märt, our Estonian cohort, in person before!

We met up at LAX around noon on Thursday, and road-tripped up to the ranch in three SUVs, after an obligatory stop at In-n-Out for those who’d never had it.

It was after dark when we made it to the ranch, so while we were aware of how remote it was, thanks to the dark and twisty roads, we had no idea how beautiful it was. We checked in, said hello to the resident cat perched under the Christmas tree in the lobby, and changed for dinner. Jackets and dresses required in the dining room! 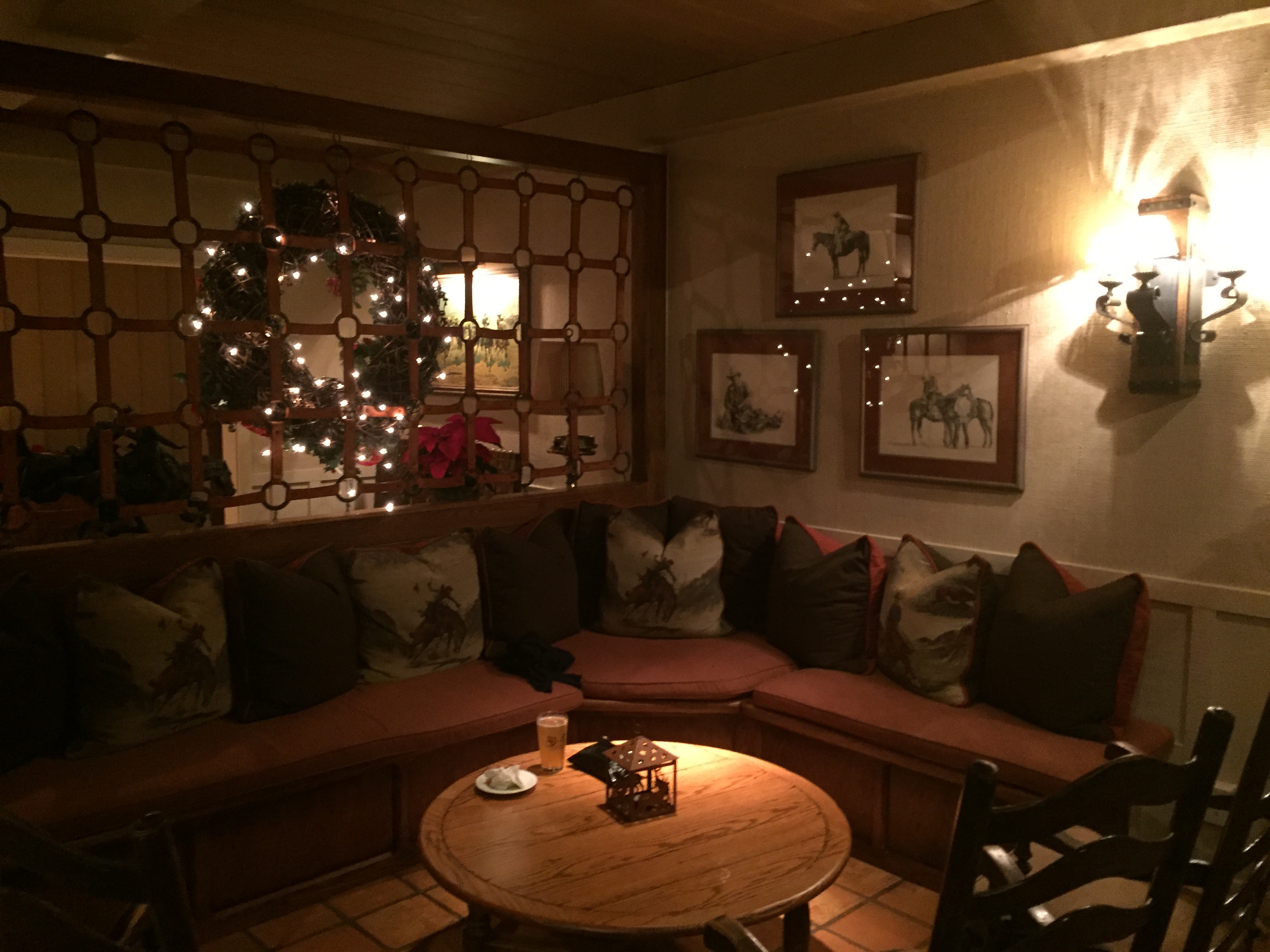 The food was amazing and the service was top-notch throughout our stay. The ranch was a really cool combination of rustic and classy - wagon wheels and cow hides aren't your usual fancy decor, and yet it worked. The holiday decor was gorgeous, too. 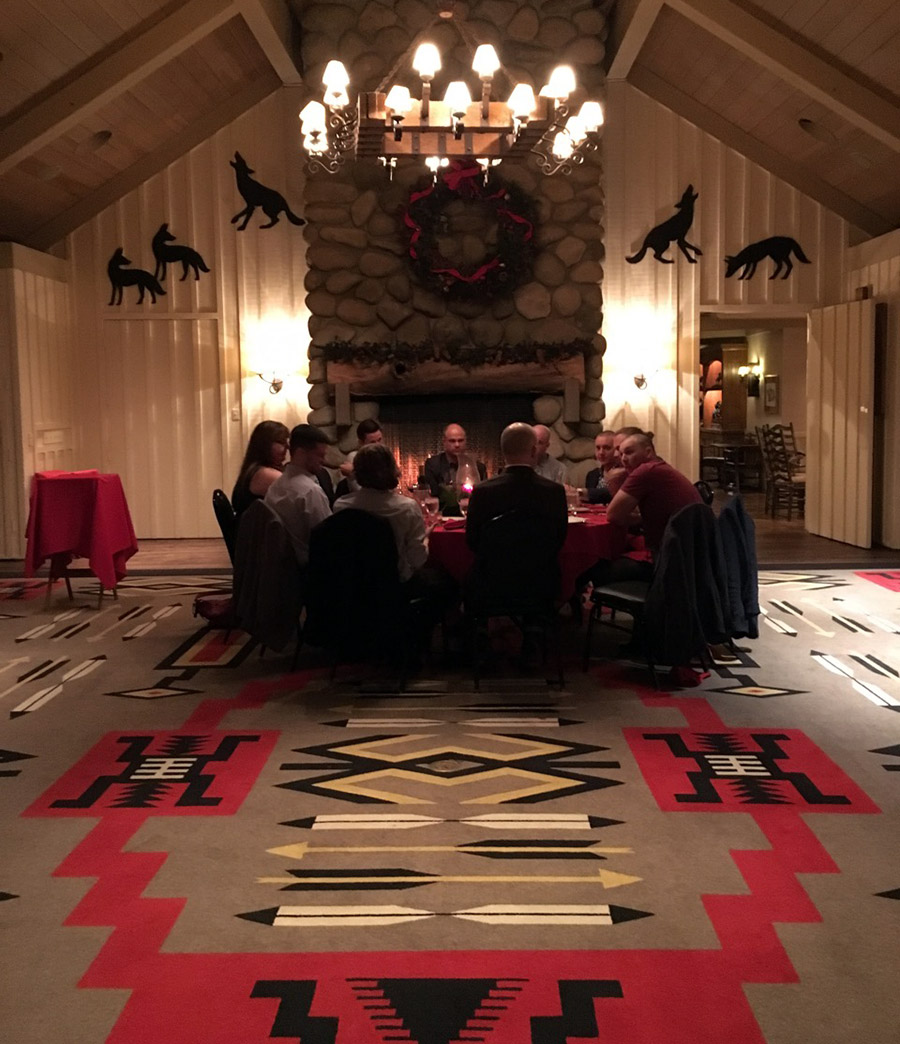 On Friday morning, we had breakfast, and then met with Jen Dary for some Plucky activities. We gave an intro - who we are, and what we wanted to be when we were little. From astronauts to garbage men, somehow we all wound up in the same room as Chromatic team members. We dug into why we had those career goals as kids, and how our current positions and passions reflect those childhood aspirations. This was definitely a highlight for some of our team.

The partners then delivered a presentation on the state of Chromatic. This was an overview of where we’ve been, where we are, and where we’re going. It was a really valuable look at the company. As a developer, I don't spend much time worrying about the nuts and bolts. I trust our fearless leaders, and they're, in general, very transparent about what we are up to, but I think a yearly look at the numbers is great for everyone.

Jen then led a discussion about our dream clients. This was an exercise to explore who each of us would most want to work with. We talked about how we can work to get in touch with those clients, and how we might attract them. The team also discussed what kind of volunteer work we’d like to do, if we could. To cap it off, we talked about our goals for the coming year. Not surprisingly, a major goal for 2016 is to contribute more to the Drupal community, which we’re already hard at work on.

We had boxed lunches and a few hours of free time. I spent some time meeting the animals over in the petting zoo. In addition to your usual ponies and goats, there was a stall full of guinea pigs and bunnies, and you can take a big bowl of food and just sit down. It’s pretty great therapy, and extremely cute. Some of the team went for a hike and were startled by a rattlesnake! Ask Tyler about that one sometime. 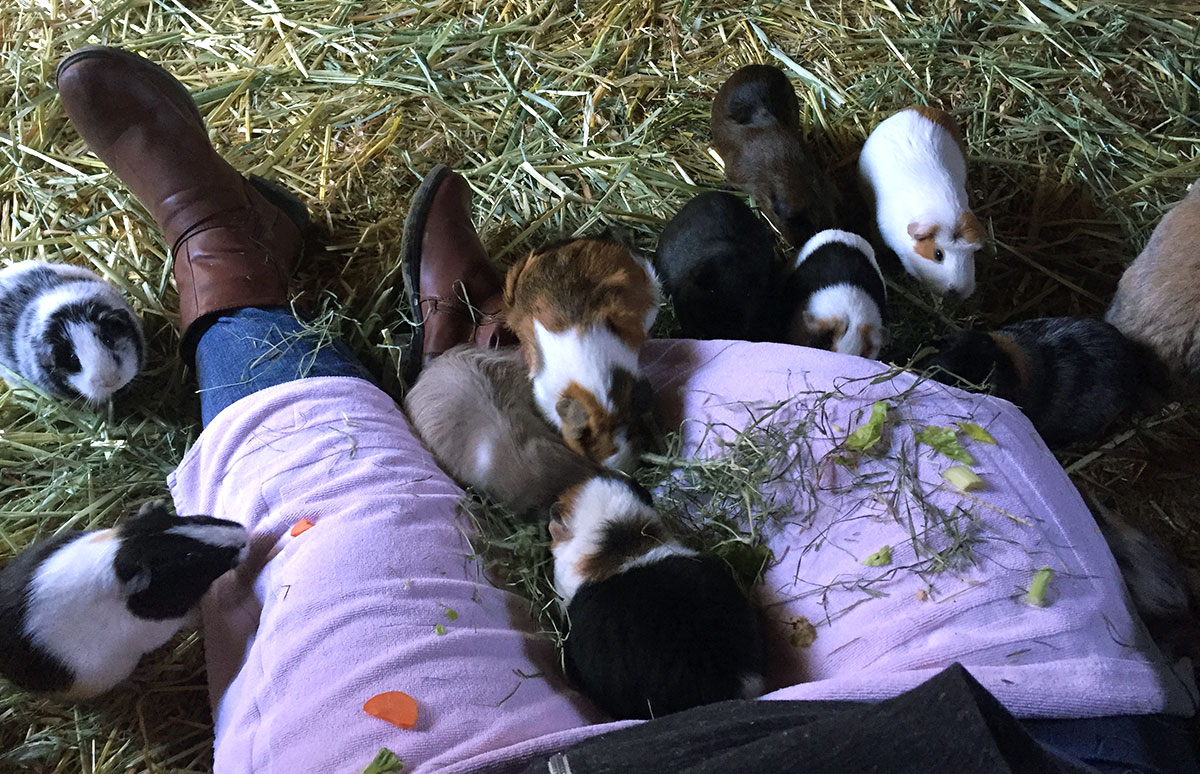 After lunch, we regrouped for headshots and team photos, which were a blast, as you can see from the photos on our site.

Dinner on Friday was followed by lightning talks in Dave’s cabin on an impressive array of subjects! From Tyler telling us how important it is to save for retirement, to Christopher’s entertaining recounting of an epic bicycle ride through Canada, to Gus’ Talk on Talks, we learned a lot about our team members and their interests and expertise. Märt told us about the fascinating ways that Estonia uses technology. Adam had us thinking about how increased use of site-building technology keeps us on our toes as web developers. 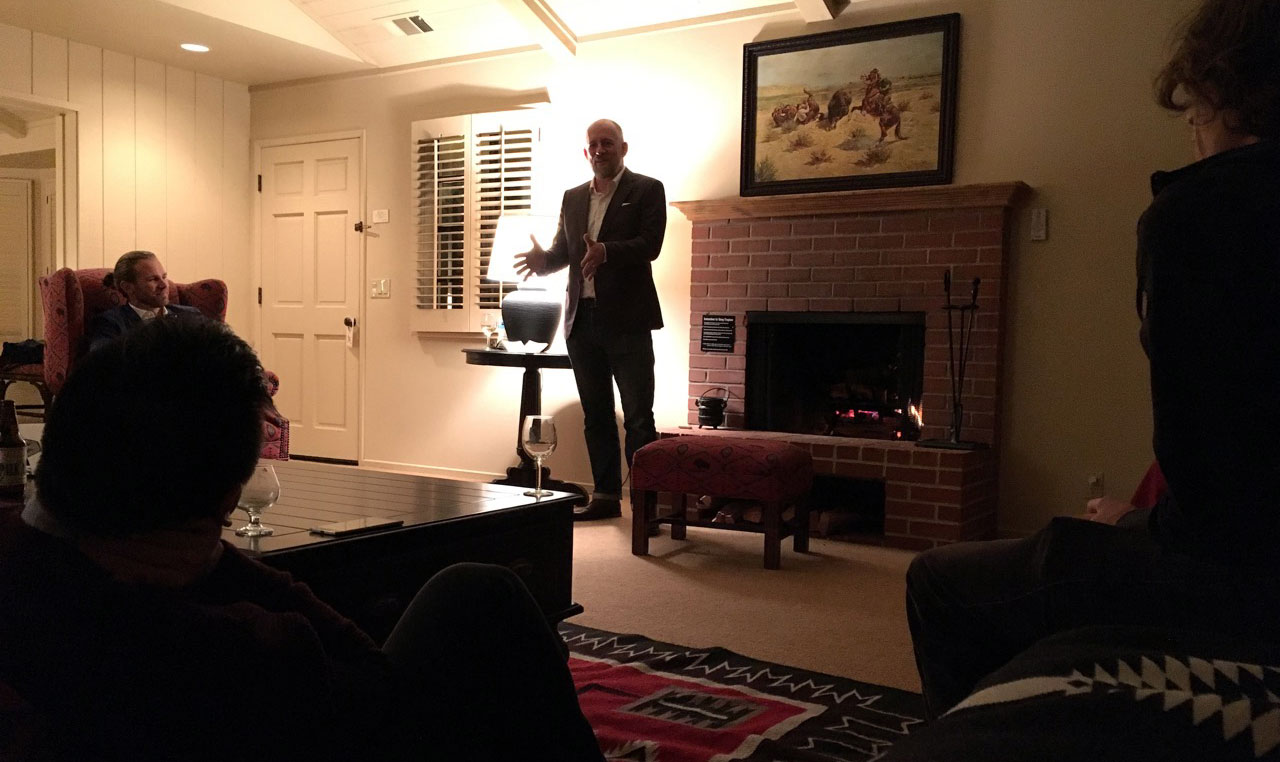 After breakfast on Saturday, Jen sprung a question on us: would we be in her music video? The answer was a fairly resounding “Why not?” We went outside, tested out some settings and choreography, and filmed a few takes of us singing and dancing for Jen’s video cover of “You’ll Be Okay.” She asked us to be brave, and we were! (And also silly).

We had a few more lighting talks to finish up, including Dave and Chris presenting the complete history of Chromatic. It was crazy to hear all about how our company came to be, who started it, and how it got to where it is now.

In our last session with Jen, we talked about our highs and lows: of the past year, of our lives, both professionally and personally. It was a really emotional conversation. For some of us, a difficult one. In the end, I think we all felt closer both as co-workers and friends. If nothing else, we had some more context about who each of our co-workers are, what they’ve been through, what motivates them. Jen has an amazing way of making everyone want to participate in a really genuine way. Some of it felt like a big group therapy session. It was a really safe space to talk, and I think it was really helpful, especially for a team that doesn’t get together in person very often. I didn't know we needed Plucky before this weekend, but Jen’s thoughtful questions and super-friendly, positive personality made her feel like part of the team. Now I can't imagine having had some of those conversations without her. 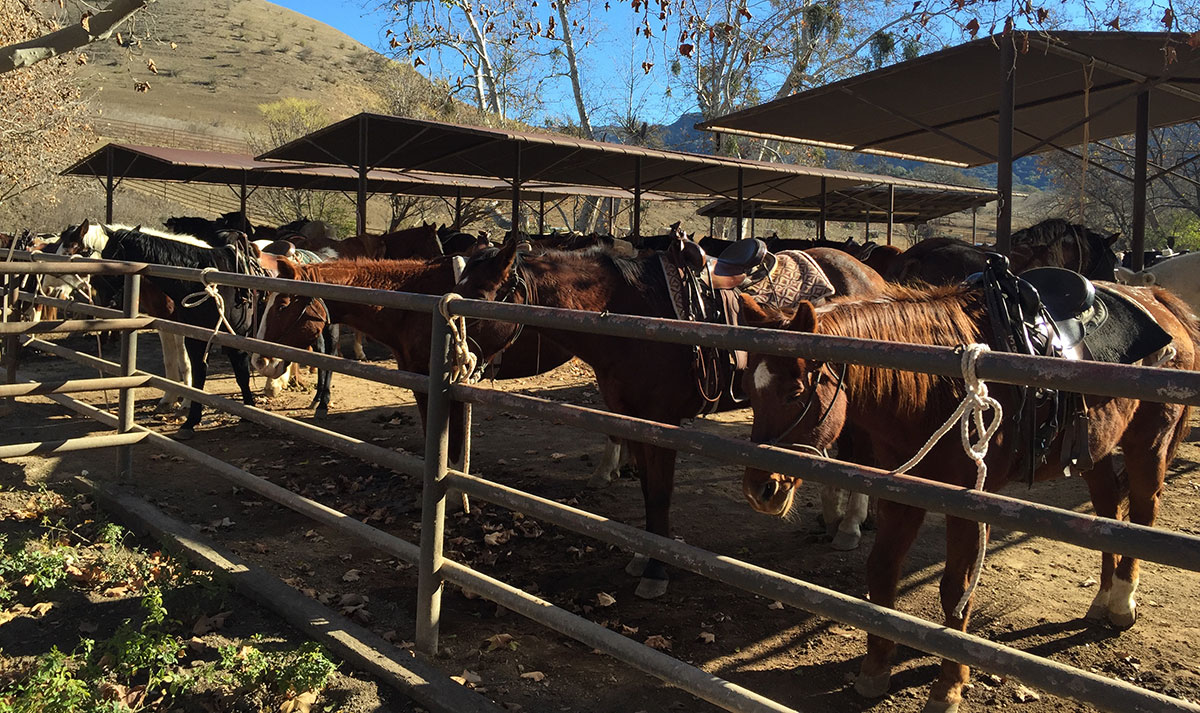 We had some free time after lunch to enjoy the ranch. A few of us went horseback riding, some people hit the pool and the hot tub, and some headed into town. It would be hard to overstate how beautiful the ranch is. 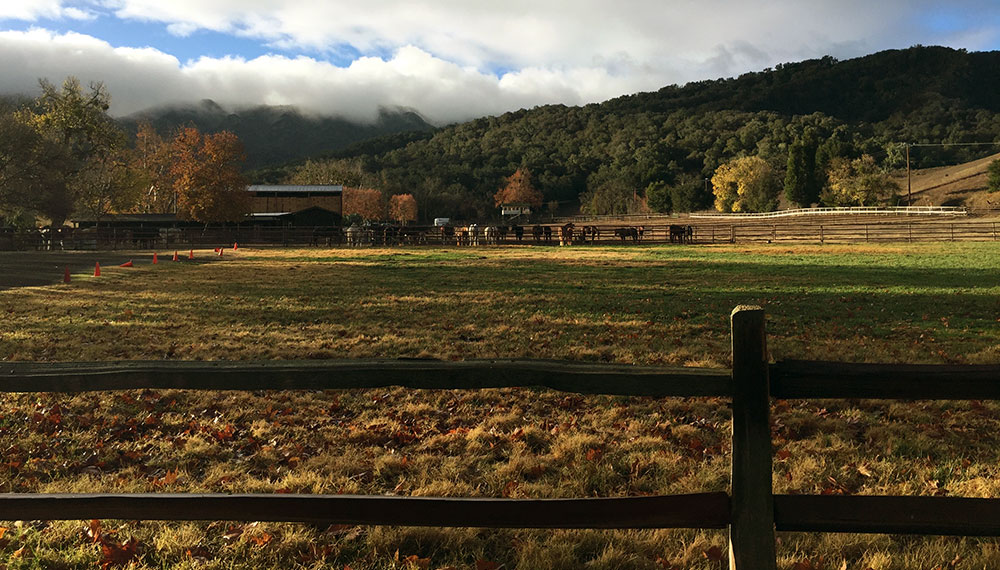 Our last dinner was excellent, of course, but a little bittersweet. When talking about my job, I often tell people that the worst part of working for a distributed company is that I don’t get to see my co-workers often enough, and it’s true - it’s so essential that we get together for retreats like this, since we can’t meet up for an after-work drink or anything like that. 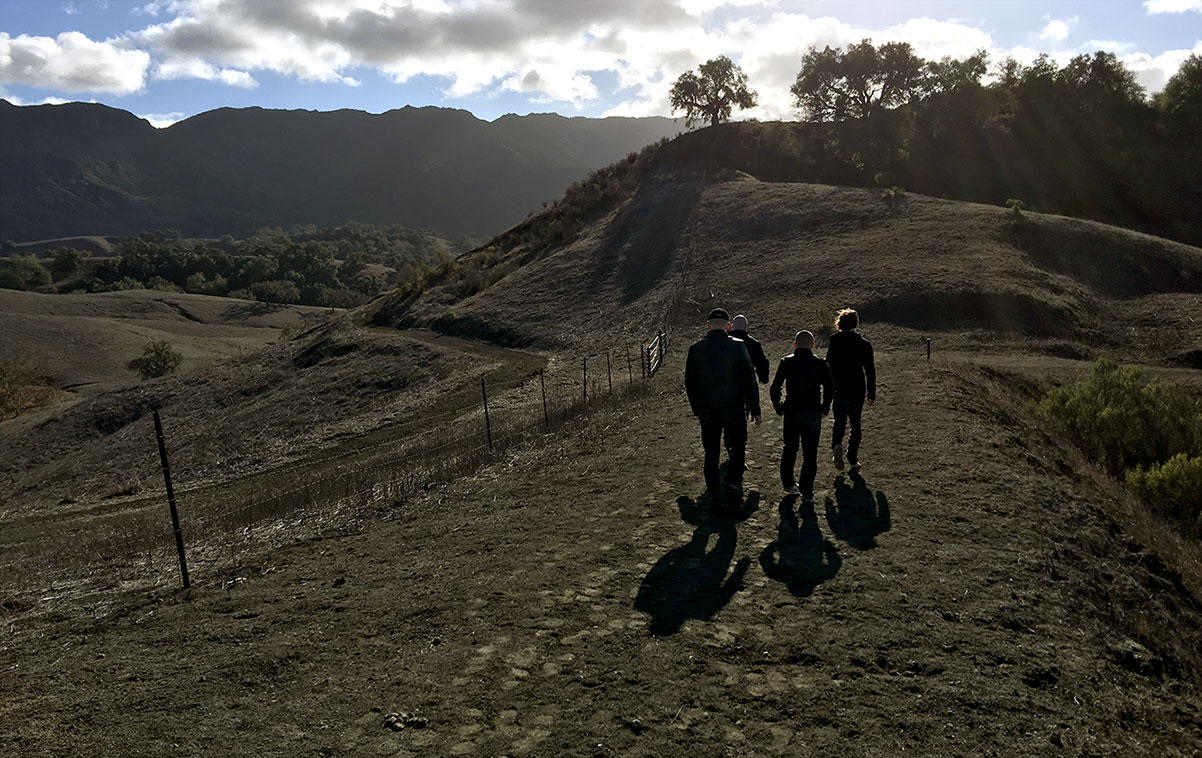 We left early on Sunday morning, and took a beautiful drive through the mountains and back to LA (stopping for coffee along the way). We parted ways at LAX, keeping in touch on Slack for the rest of the day, of course.

As a long-time remote employee, the COVID-19 pandemic hasn’t disrupted my daily life as it has for many others. Several years ago I moved from the city to a rural community with no access to high-speed internet. I needed to adapt quickly to my new reality and find a reasonable solution for my work and family needs.

12 Tips for Working From Home – Signed a Fully Distributed Company